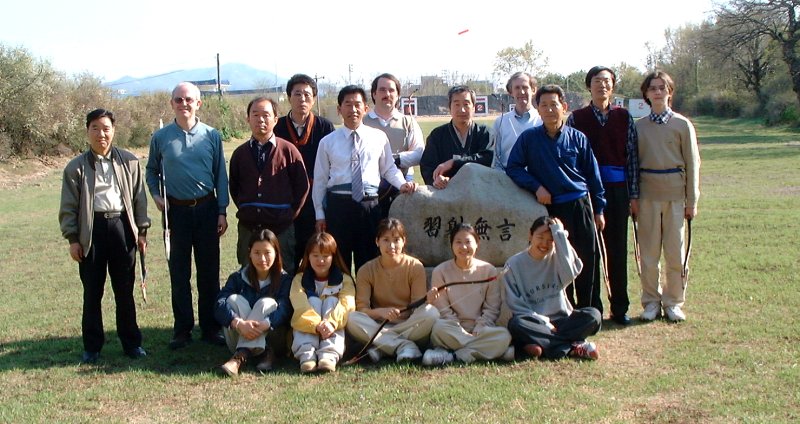 Members and guests of the Hu Rim Jung Archery Club

My Easter holiday this year with my wife and children took my to Kyongju, South Korea, where we visited Tom Duvernay. This was my second trip to Kyongju, the old capital city of Korea in the Silla Period. My whole family were overwhelmed by the friendliness and generosity of the Korean People (including Tom Duvernay, who - at least in archery terms - should be regarded as an honorary Korean.)

We spent a couple of afternoons at the Hou Rim Jung ('Tiger Forest Archery Club') and I had a chance to study Korean technique close-up. As Tom has already explained in detail elsewhere on ATARN, Korean archery is an ancient tradition with its own styles and precepts, many of which were influenced by China.

The archery range itself is 145 metres in length, commanded by a stone with an inscription in Chinese saying 'Silence During Archery Practice'. This precept is rather honoured in the breach; although things are not allowed to get too rowdy. 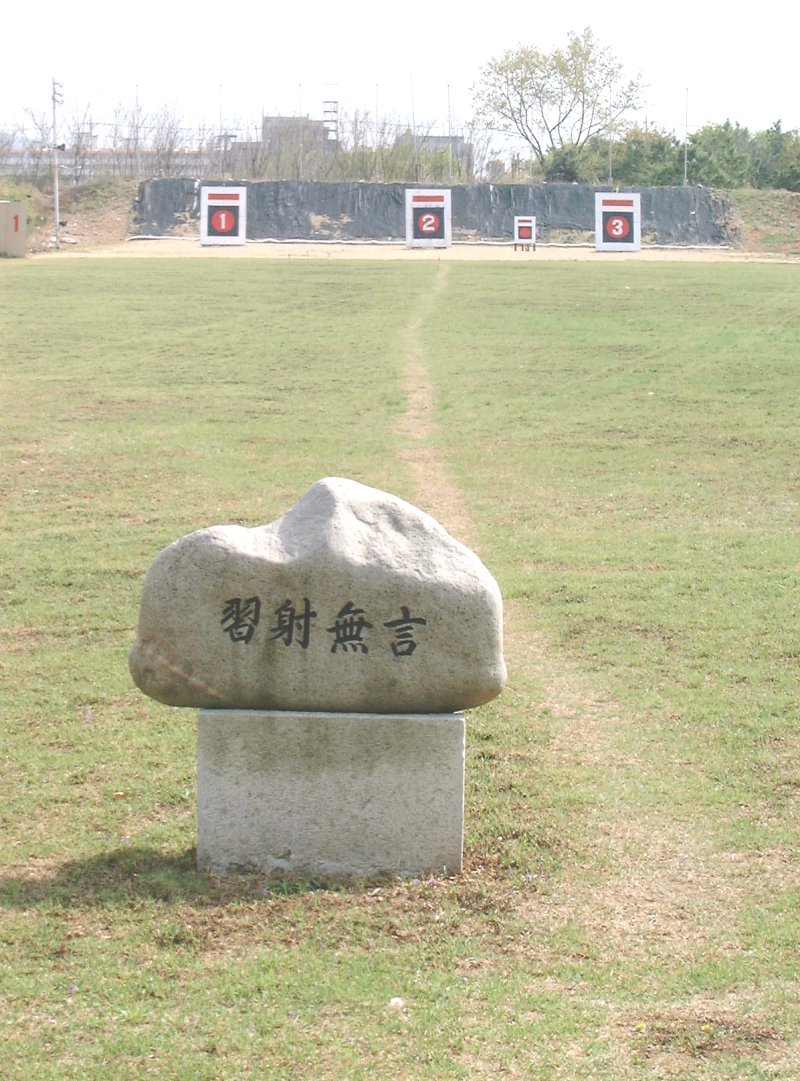 There are three big targets and one small one. A hit anywhere on the big targets is enough to score (greeted with the comment 'guan juhng' from the judge.) If you hit the small target, though, you have to pay a fine of 10,000 Korean Won (a bit over US$8).

In another informal game, players put KW1,000 (a dime) into a Kitty and then try to hit the small target. Anyone who hits takes KW1,000 from the kitty as his prize.

In more formal competitions, a judge sits at a raised table and the archers take their places at fixed positions. Each one shoots in turn as the judge calls his name until they have all shot a round of five arrows.

Shooting at this distance is a wonderful experience for someone like me, hemmed in by the confines of crowded Hong Kong!

Techniques vary a bit, with different archers varying in their stance. Some position the arrow under the jaw with the string tight against the cheek, while others keep the string well clear of their faces. All the archers use the Mongolian draw, although left or right handed shooting is permitted.

During my stay, I visited Kyongju's renowned fletcher and bowyer.

Master fletcher Choi Geum Dong started his apprenticeship at the age of 17 and studied for ten years.

Choi obtains his arrow bamboo from the northern part of South Korea, cut into shafts of about one metre. After curing, the shafts are tipped with brass blunts and a wooden nock is inserted and bound forward of the nock with sinew. Before adding the pheasant feather fletch, Choi has to painstakingly straighten each arrow after heating it over a gas flame.

Master Bowyer Park Gihk Hwan's work has been well-documented in Tom Duvernay's film. Apart from providing a steady supply of beautifully-crafted horn bows, he is trying to create replicas of variant traditional Korean bows such as those presented by the King to generals on ceremonial occasions. He has even ventured into reproductions of Chinese bows.

Korean archery is one of the strongest national archery traditions remaining in Asia today. The number of participants is swelling with the inclusion of university students among its practitioners, and this assures trade for traditional horn bowyers and fletchers (augmented by a brisk business in replicas made with artificial materials for novices to learn on.) The Korean Equestrian Association in Seoul boasts a team of horseback archers.

It is with regret that I report the death in January 2001 after a short illness of Dr. D. Batchuluun, professor of sports medicine at the Mongolian State Sports Institute and a member of ATARN.

Dr. Batchuluun was a Mongolian national of Chinese descent who was a fluent reader of Classical Mongolian, Tibetan, Chinese, Russian and English. He was actively involved in research on inner Asian traditional herbal medicine.

It was Batchuluun's firm grasp of the English language and deep knowledge of Mongolian traditional archery that enabled me to bring detailed information about Mongolian archery to ATARN's pages and to Instinctive Archer Magazine. During my visits to Mongolia, he gave up many days of his time to accompany me around the country and interpret the explanations of bowyers and practitioners of Mongolian archery. 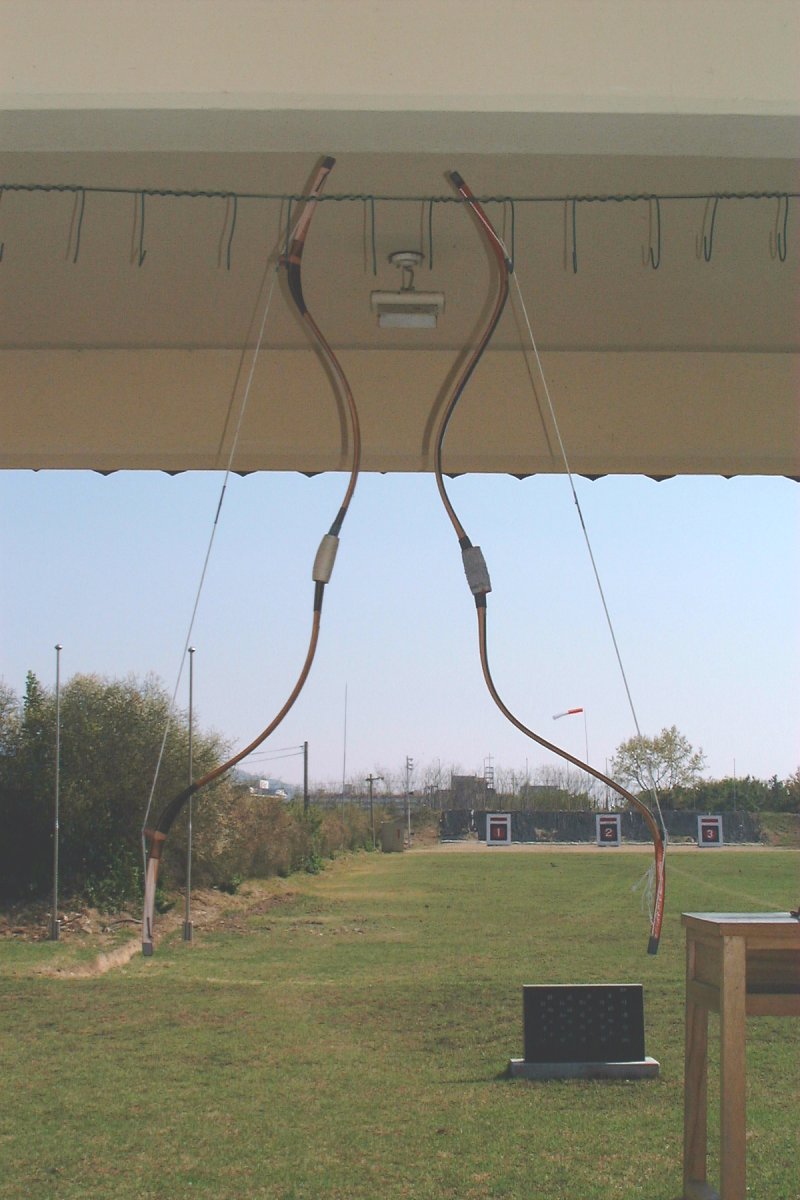