This week, I have had a chance to examine some Western Han Dynasty (206 BCE - 8 CE.) archery equipment. Examining archery equipment that is over 2000 years old is an extraordinary event in the West; but in Asia, with a long history of burial of weapons interred in graves together with their owners, we occasionally get the privilege of examining such material. Last week, some Hong Kong antique dealers and collectors were patient enough to let me take photographs of interesting items. The problem with these items, of course, is that they all lack archaeological context.

The bow on the left is in fact one that I have owned for some time. I have examined carefully with a microscope. Although it has not been radiocarbon dated, I am convinced it is genuine. Dr Grayson has also inspected it and felt sure it was made by a bowmaker - not by a faker.

You have my permission to  save the this, full-size image on your own hard disk, and then open it in your own graphics editor software. The view you have here is of the back of the bow. You should examine it at 1:1 scale.

The bow is 159cm long and 3.4cm and 1.4cm thick at the widest point. Looking at the descriptions of Neolithic European bows on p. 91 of 'The Traditional Bowyers' Bible', Vol. 2. (Ed. Jim Hamm, Bois d'Arc Press, 1993. ) the positioning of the grain most closely resembles that of the Holmegaard bow. Like the Holmegaard bow,  there is some doubt as to which face was the back. The rounded grip suggests that the flatter side of the limbs formed the back; but the string nock is cut with a slant in a way that suggests the opposite.

The grip is cut at a point where there is a significant ring in the grain. Out along the limbs, the grain is very symmetrical. I have not been able to identify the wood. What is unusual in this specimen is that is has been preserved dry and has hardly distorted significantly in any dimension. The wood is very dense and if I strike it when it is suspended, it rings out with a clear musical tone.

I have examined many contemporary early Han images of shooting arrows with  bows, and it seems clear to me that this bow would not have supported the draw-length in vogue for arrow shooting at that time. I think it more likely that this was a pebble bow, strung either singly to shoot pellets with a groove, or single- or double-strung in bamboo with a pocket. A pebble bow is only drawn to the corner of the eye, and this bow should have met that requirement (although with a prodigious draw-weight.)

The Neolithic Ashcott and Holmegaard bows pre-date this specimen by some 2000 years. The similarity of design is, however, startling. Contemporary Han pictures of bows and archery equipment do not illustrate this sort of equipment. However, even around 1300 BCE, there were oracle bone script characters denoting pellet-bows. Excavations have also uncovered pebbles with a channel sawn in one face to take a string.

Han bows used in warfare against the Huns were clearly horn/wood/sinew composites suitable for shooting on horseback. Although we see these bows depicted in stone carvings, the convention at the time was to depict things side-on. We therefore have little chance to assess any detail about the thickness of Han bows. Although I have come across accounts of Han horn bows being excavated in burials, I have never seen an original one or even a good photograph. The best approximation is the type of bow excavated from the deserts of Turkestan, (for example, the Niya bows) which are normally of late Han or Jin design. There is some doubt as to whether these bows were 'Chinese' in any sense.

So I was particularly interested to come across a terracotta high-fired Sichuan funerary military figure grasping a bow in his hands. I have two Han pottery archers, but in both cases, the bow was made of wood and has long since rotted away. The bow with the Sichuan figures, however, is modeled in terracotta. The figure and the bow are both a little stylized: for example, the curvature of the soldier's boy is exaggerated and the bow is molded to the shape of the body.

In these photographs, one is immediately struck by the breadth of the limbs. This bow is hardly different from a nineteenth century Indo-Persian bow that I have.  The segmented band visible behind the bow does not seem to be a string. It is either a strap on the soldier's uniform, or some other device such as a bag for the bow.

Is the bow strung? Perhaps not. There is no sign of a string, and without any sign of string bridges, the alignment of the siyahs is rather unlikely for a strung bow. The general appearance of the soldier is more at ceremonial attention than in a battle position, so it is possible that he would have had his bow un-strung. (I have noticed that the Mongolians were always un-stringing their bows in warm weather as soon as they had finished a round of shooting.) 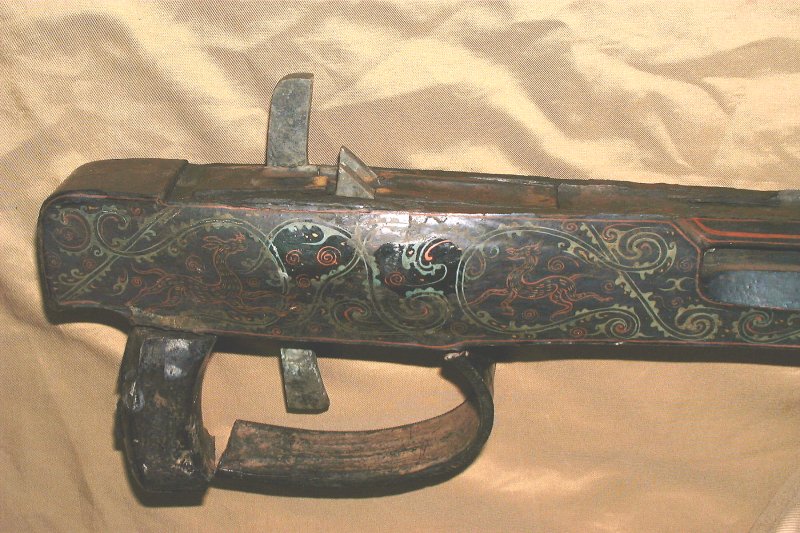 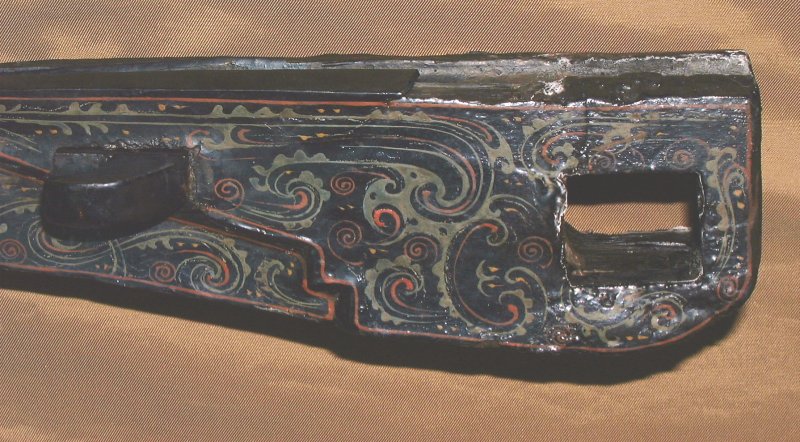 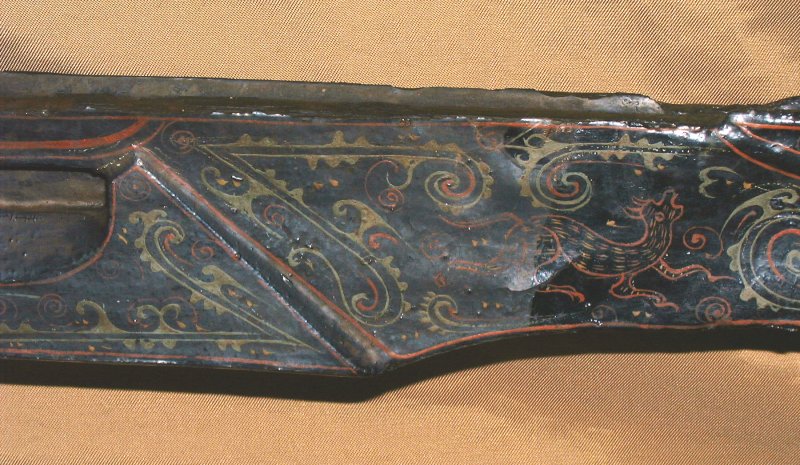 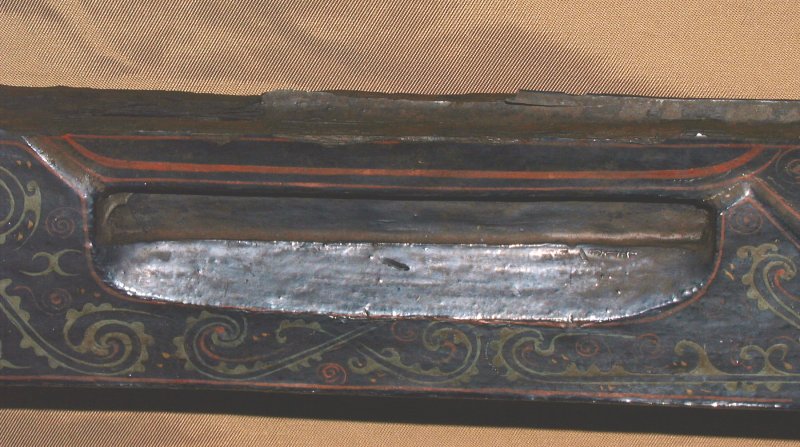 Top of latch with bone or ivory arrow-guide

Front of stock with binding pegs for the prod

This crossbow is exceptionally well-preserved. The prod is not present and probably never was. The crossbow was in a basket, minus prod, accompanied by a small wooden box with partitions of a size that might have held quarrels (but there were no quarrels in it.) All the items are completely waterlogged. The latch, however, is made of non-corroding bronze and still moves freely. 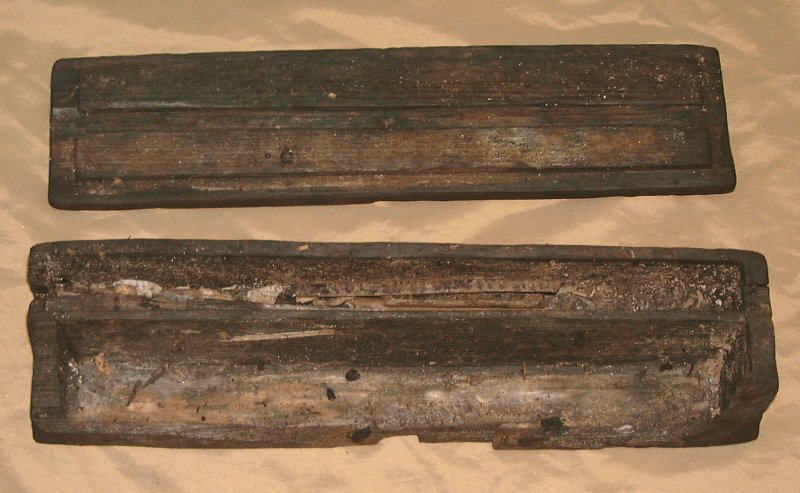 The wooden box excavated with the crossbow

Artistically, the painting on the lacquer is more reminiscent of early Han decoration, but the design of the mechanism is more archaic, lacking a bronze casing. The floor of the arrow guide surrounding the latch is made of bone. The channel of the arrow-guide is also lined with bone or ivory. Strangely, there is a corresponding channel on the underside of the stock.

I can only speculate on the composition of the prod. It is might have been horn and sinew. Other alternatives would have been a self prod or a number of layers of bamboo. There is no sign of ware. This crossbow has probably never been fired.

Season's greeting to you all, and a happy and prosperous new year!