I am tapping out this news-letter between two trips. I have just been in Peking and Kunming (provincial capital of Yunnan Province of China) for one month.

In Peking, I spent some time interviewing an old Chinese bowyer about the history of his family's bow workshop, which started in the Qing Dynasty under the Emperor Qianlong (in about 1750) and operated up until the Cultural Revolution in 1966.

Some members have asked me whether Chinese traditional bows can be obtained nowadays. ATARN is now able to offer reproductions of Chinese traditional bows; but they are suitable only for decoration and historical enactment: not for serious shooting. I say this because they have been made recently using a bamboo core backed with glass fibre, decorated with lacquer and snake skin. This certainly gives a convincing appearance of a Chinese bow: but their shooting qualities are poor because of inferior materials and workmanship. The bows are ambidextrous and pull at about 28# - 32#.

The cost of these bows is US$130, plus shipping. Do not order these bows for serious archery purposes. Do order if you want something interesting on the den wall, for enactment, or for getting the correct proportions for making your own Chinese or Mongolian bow. I shall be bringing a few to Denton Hill in July.

Meanwhile, with ATARN's help, I am  dedicated to helping to revive the ancient, traditional bowmaking craft in China, and I shall strive to bring you fully-functional Chinese bows and arrows in due course.

I also have a supply of pre-cut water-buffalo horn for bow-making. Each matched pair is about 60 cm long by 4 cm wide coming to a point at the top. They cost US$50 per pair plus shipping.

I had a chance to study some interesting traditional Chinese pellet-bows. The bow itself is quite light, backed with sinew but without horn. (One such bow, however, had been converted from an arrow-bow which had broken and is horn-backed.) They were decorated with snakeskin and often had tips carved in the shape of a monkey's head.

The most extraordinary part of the pellet-bow, however, is the string. It is made up partly from silk bowstring and partly from rigid bamboo straps. A small cup of carved bamboo covered with sharkskin holds the baked clay pellet. The bow is drawn with the bow-hand grasping the grip below centre, imparting and outward torque to prevent the pellet from hitting the grip when the string is released. The draw-hand thumb and forefinger grip arround the cup, holding the pellet in against it. This is easy because the draw-weight does not exceed 25#. The pellet cup is drawn back to the archer's eye, and the shot is made aiming at the target past the top of the grip (which is aligned level with the pellet-cup.) 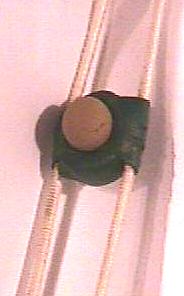 Pellet set in the pocket of the Chinese pellet bow.

This sort of bow was popular for shooting at small birds. The shot is supposed to be non-lethal: the idea was to catch birds live: not to kill them.

Yunnan Province is home to 26 cultures (including Han Chinese, Manchus and Muslims.) Many of these cultures (Shan, Khmer, Dai, Miao, Nu, Bai and Jinu) are renowned in history for their use of the crossbow. In fact, historical and archeological remains show that these tribes used the stonebow and crossbow but not the conventional arrow bow. They were famous for their use of powerful poisons on their arrows.

I was able to obtain three of their traditional crossbows, goatskin quivers and bamboo darts, as the Chinese government has recently banned all hunting in their areas as an urgent wildlife conservancy measure.

Later I shall put up an article on the crossbow culture of Southwestern China.