With a sinking feeling, I faced writing the newsletter once again with nothing to offer other than something about Chinese bows or archery. That's a problem I face each month, me being the webmaster and at the same time knowing little about archery and equipment outside China.  Then at the last minute I was saved by a delegate I met at a conference held here in Hong Kong.

Hasman Shah Bin Abdullah is a professor at the Universiti Teknologi MARA in Selangor, Malaysia. Over dinner, we discussed traditional archery and he came up with the following story.

"When I was a kid in Segamet, Malaysia in 1968-69, there was an old Tamil man who worked with the Public Works Department. We just called him 'uncle' in Tamil - I don't know what his real name was. Anyway, he used to make bows and shoot pellets from them. I and the other kids used to help him. We would go into the jungle to collect bamboo, and then he would cut the bamboo and soak it for some time in a mixture of three kinds of oil. I can't remember what oils they were, but I think one was something we called 'salajeeth'.

I took off a Saturday from a business meeting  in Geneva to visit the workshop of Patrice Canale in Bordeaux, France. Patrice has been making a variety of traditional bows in modern materials and his repertoire includes Mongol-style bows. We spent and afternoon examining a couple of old, broken Chinese bows I had taken with me we shall try to see whether he can reproduce one in modern glass fibre.

Bordeaux is a beautiful city close to outstanding deer and boar hunting country. If you are interested in one of Patrice's Mongol bows, you can contact him at his firm, Euro Archery. (euro.archery@wanadoo.fr)

Sorry to come back to Chinese things; but some interesting old bows have been coming to me from Gansu Province in West China recently. Gansu is a dry province adjacent to Tibet, and it seems that bows are better preserved there than in Peking, partly because of the climate and partly because many people there still know about how to look after bows. One bow I recently obtained was an old, damaged Child's bow. The measurement from tip to tip along the limbs is just 123.5 cm. It is exactly two-thirds the size of a standard adult's bow of the same proportion and design, and perfectly made in the traditional way with horn and sinew, and decorated with lacquered birch bark. 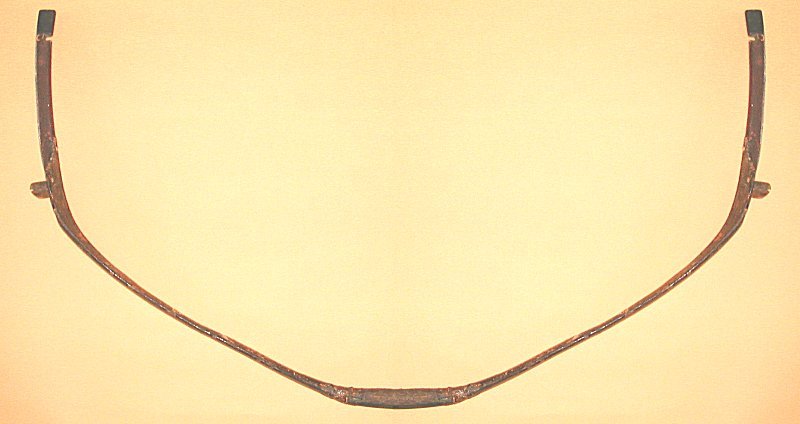 Unfortunately, the bow is quite damaged. One of the horn tips has broken off and the wood has been squared at the break and a new tip carved into the siyah an inch or so below it, so that the length of the siyahs now differs by about one inch. (I have seen this sort of patch-up in many Chinese and Mongolian bows.) In the illustration above, I have used the computer to restore it to its original appearance. Based on a standard brace height, a Chinese bow has a string length between nocks approximately 0.855 of its length measured along the limbs. Therefore, the string length of the child's bow was approximately 105.5 cm.