In China, it is the custom to celebrate the lunar new year (Wednesday 24 January is the first day of the Year of the Snake) by cleaning and decorating the house and putting up auspicious new year pictures.

The new year picture on the left is a typical example, although it is unusual. It is a scroll painting which, I should say, dates from the late Qing Dynasty (around the end of the 19th Century) and a slip of paper bears the note "Master Zhang shoots the heavenly dog."

Who was 'Master Zhang'? He seems to have been the same person as 'Zhang the Immortal' (Zhang Xian) who was known from an account dating from the Song Dynasty. Meng Chang set himself up as overlord of the Later Shu kingdom. He took as his concubine the lovely "Lady Flower Stamen".

Meng Chang was defeated in 965 and his concubine was captured and taken to the Palace of the first Song Emperor, Tai Zu. She remained faithful to her husband and kept a painting of him pulling a bow and holding a pellet in his fingers. She hung the painting on the wall of her chamber and made offerings to it each day. When asked by the Emperor why she revered the painting, she deceived him by forging one of the characters of the title . claiming it was a picture of "Immortal Zhang", and that praying to it would make her bear sons. The picture later became the subject of folklore and was used as a symbol of bearing sons. 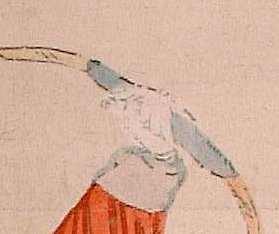 That is obviously the intent behind this painting, with all the young boys milling about his feet. But I have never seen any mention of him shooting at a dog. Is the black dog the cause a lunar eclipse? (A lunar eclipse is capable of making the moon turn red.)

If you look carefully , you will see that the bow is clearly a pebble bow with a double string, (and, indeed, there is no arrow to be seen.) In the enlargement on the right, you can see that he has a pellet held between his fingers at the grip, ready for the next shot.

ATARN is not a top eyeball-attractor on the Web; but we did quite respectably. According to my statistics package, there were about 17,000 distinct visitors to the site in the year 2000. The largest number was in October.

I have received warm support for ATARN from the Society of Archer-Antiquaries, who have given permission to re-publish articles from their Journal. I shall also continue to seek the co-operation of Instinctive Archer Magazine if they have further articles about Asian archery.

I am continuing to work on an electronic edition of 'Arab Archery' (Faris and Elmer). I now have the text in electronic format and I shall use the Chinese New Year break to start on formatting. I regret that we shall lose the accuracy of some of the transliterations of Arabic words in the process.

I sincerely hope that you will feel able to supply materials for publication as well. ATARN is not an academic journal. I hope we will never exclude views and work by enthusiastic archers and recreationists.

Wishing you a happy and prosperous Year of the Snake!