I was at 40,000 feet over the Pacific Ocean on 11 September when four hijacked jetliners were used to attack the United States with such terrible effect. Our hearts go out to the bereaved families from 22 countries - and particularly those from the United States which suffered the worst losses.

Was it sheer coincidence that as these events unfolded I was reading of another terror attack, unprecedented at its time - the attacks of the Huns on Eastern Europe and Russia in 395AD? 'The World of the Huns' by Otto J. Maenchen-Helfen (Berkley, 1973) offers interesting material for those who like to read lessons from history. The Huns were poorly understood (and remain so.) No-one at the time could fathom their motivation: 'gratulabantur mortuis et vivos plangent.' (Glorying in the dead and lamenting the living.)

The Prophet, Muhammad, who possessed three bows, taught that skill in archery was a religious obligation (as reflected in sura viii. 62.) Some Islamic authors relate how the Archangel Gabriel had taught Adam that the bow is the power of God, the string is the might of God and the arrow the punishment of God. Chinese writers of the same period expressed the view that no man, while of sound body and mind, should ever give up the practice of archery. Laws to similar effect came into force at the time of English King Henry VIII. Countless other civilizations must have expressed the same idea in some way or other.

The tradition of archery has the potential to bring together people from all over the world. The most extreme exponents of Islam to the most moderate can choose to respect it, as, for that matter, can the people of North Korea or the USA.

More strident weapons of war will soon be heard before terrorism is eradicated. ATARN is dedicated to refining the bow and arrow as the weapon of peace.

The International Horse Archery Festival 2001 at Fort Dodge had the great good fortune to finish two days before 11 September. It has gained in stature and experience from the first festival last year, and careful planning with indoor facilities allowed the event to be totally successful despite poor weather at times.

This year visitors could witness the whole process of Kassai's training programme for horseback archery. The biggest surprise for many must have been that an important element of the training takes place without any horses. Kassai has developed a set of military-style archery exercises, which help the student overcome the first hurdle - the transition from a gentlemanly sport to a martial art. Such a transition is vital to developing the hand-eye co-ordination and manual dexterity needed to handle a bow and arrow on horseback.

This year saw more intensive coverage of Kyudo, with workshops, rapid shooting displays and lectures. We also gained a rare insight into the cultural significance of archery in Africa, through a lecture from Cecelia Imunu from Southern Sudan. Practitioners from the native American nations were also present to share their traditional knowledge.

I was surprised how many people were prepared to get up early and practice Qigong exercises. My early morning class also looked at the relationship between Qigong and archery, and tried out some of the basic techniques of Chinese archery.

Next year, the Third International Horseback Festival will be back at Fort Dodge. There may be some 'taster' displays of different foot archery traditions, and the organizers hope to attract some archery cultures who have not been represented at Fort Dodge before. And -as always - there will be the drama and excitement of archery on horseback!

Many of you will be excited to learn that over the weekend after Fort Dodge, I was in Peking making a film (together with the Hong Kong Museum of Coastal Defence) on China's last traditional bow-maker, Ju Yuan Hao. We had a spectacularly successful day's filming which has resulted in an hour of professional video footage, narrated by the bowyer and his son, which will be sub-titled in Chinese characters and English.

Do not expect step-by-step instructions here. We are making two films: one of just fifteen minutes for continuous showing at the new Chinese archery exhibit at the Hong Kong Museum of Coastal Defence, which will be opened in the Spring of 2002; and the other for distribution to archery enthusiasts. Both of them will look generally at the techniques and the cultural background to the bowyer's craft in China. We have covered history, social organization, raw materials, cutting with the adze, gluing of the horn, laying-down of sinew, covering with birch-bark and decorative conventions.

Ju Yuan Hao has a genius for organization and for telling his story. While you would learn more technical detail from Tom Duvernay's film of the Korean master-bowyer of Kyongju or T'an Tan Chiung's 1930s study of bow-making in Chengdu, there are some surprising new insights to be gained from Ju Yuan Hao's experiences.

For example, the Chengdu bowyer, Wu Shusen, went to some lengths to keep human bodily fluids out of the gluing process. Ju Yuan Hao, on the other hand, is convinced that human saliva is a vital element in the composition of glue. Indeed, he goes to the extent of sizing the sinew backing of a bow and the birch-bark to be applied to it with thin glue and letting them dry out first. Then he licks both thoroughly to cover them with saliva and sticks down the birch-bark like one might do when sticking a stamp on an envelope. He joked that an apprentice bow-maker has to be be prepared not only for foul smells but for the fact that bows taste bad!

Another story is a Chinese legend about the origin of archery. This story is not recorded in the Chinese classics. Ju Yuan Hao related that it was inscribed on the wall of the bowyers' temple in Peking (now demolished.)

The first Emperor, Huang Di, was travelling one day when he was confronted by a tiger. He rushed to a clump of trees and shinned up one of them. The tiger waited down below.

The tree where Huang Di had taken refuge was a wild mulberry. It's branches were strong and springy. He broke off a branch and cut it to form a bow. Then he reached over to the next tree. It was a willow and its twigs were straight. He broke off a twig, cut a nock in it and sharpened it to form an arrow. Next to it was a clump of bamboo. Its outer skin was strong and supple, so he reached over and stripped some off to make a bowstring. With this bow and arrow he shot the tiger in the eye and it ran away howling in pain. So Huang Di was able to make his escape.

The film should be cut and dubbed by April 2002. I shall make sure you are all told how to get a copy.

In London last week, I hadn't counted on the British Museum being so generous in letting visitors take photographs in the galleries, so I turned up without my trusty digital camera. Coming upon the Assyrian exhibits in Galleries 7 and 8, I realised my mistake: the wall carvings from the Palace of Ashurbanipal, King of the Assyrians in Niniveh contain a wealth of detail for archers and re-enactors. So I nipped out to the museum shop and bought a throw-away camera with a flash. Here are the photos I took. 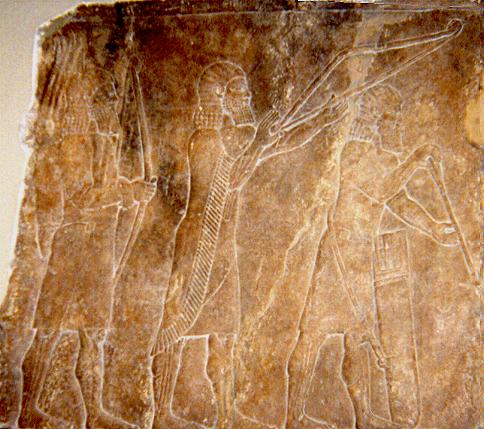 A vassal state has made a tribute of bows and arrows.
But are the bow-limbs and arrows straight? 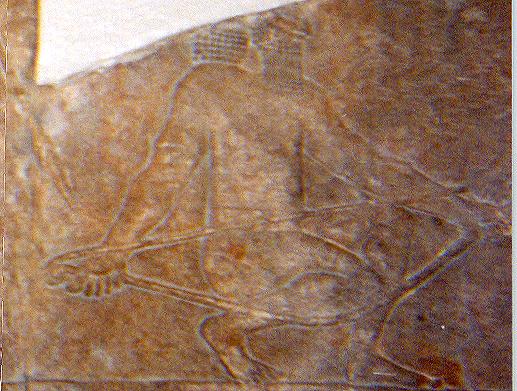 Looks alright. Let's get one strung up.
(Assistant on the right is preparing to fit the string over the nock.)

Shooting in battle. A guard is always on hand to protect the archer with a shield.
We are looking at the archer's back (otherwise the draw-hand wouldn't be that way around.) The archer is left-handed. 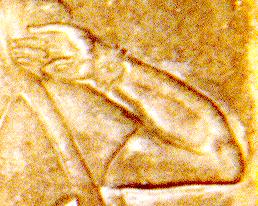 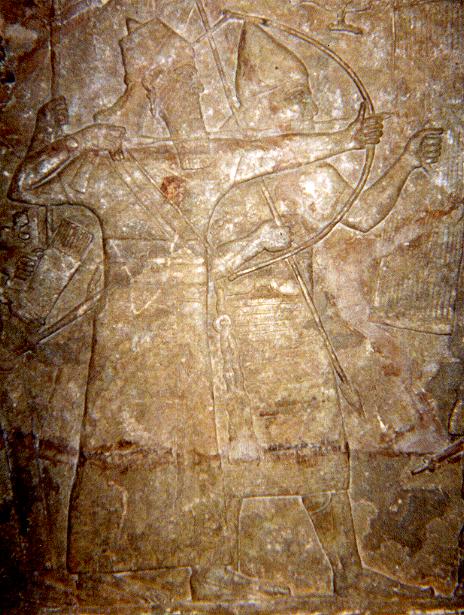 Ashurbanipal shooting on foot. Still left-handed and with a shield-bearing bodyguard.

Two archers protected by a large shield.
Front view, and right-handed this time. 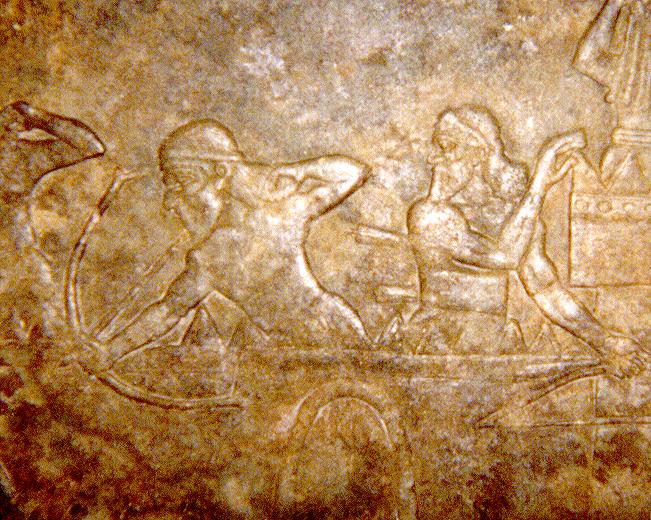 Elamite soldiers shooting down from a rampart. We are looking at the archer's back.
Both soldiers are left-handed again. I could get to like these people. 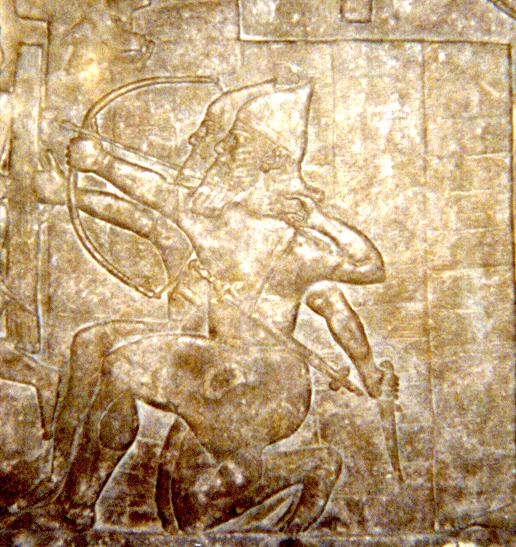 Shooting from a kneeling position, again with a shield-bearing bodyguard.
Left-handed archer seen from the back.
Bow-hand thumb seems to push hard against the upper limb of the bow,
with the arrow passing on the outside of the bow. 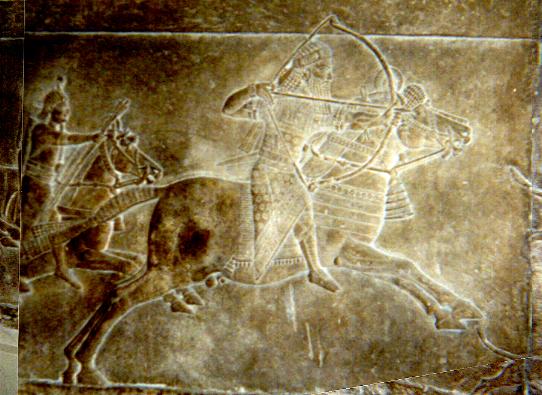 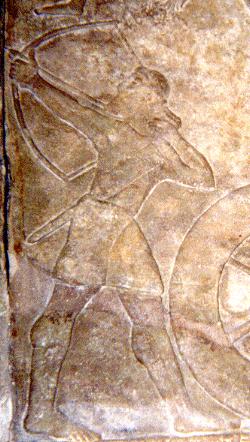 Turning to shoot behind. Left-handed archer.

Ashurbanipal's palace at Niniveh was built around 645BCE. Some scenes are battle scenes showing a battle against the Arabs and the Elamite city of Hamanu during a revolt that took place from 652-648BCE. For further information, see Julian Reade: "Assyrian Sculpture". British Museum Press, 1998.

Following issue of this Newsletter, Bede Dwyer came up with a number of comments and criticisms. Here they are: